All about money and London.
Posted by William at 02:25 No comments:

".... variously, a Communist book-packer, an RAF pilot, a gasworks fireman.."

"... a tramlines repairer, a kitchen porter, a male prostitute, a rider of freight cars in Canada, a prize-winning advertising copywriter, a drama teacher, a CND campaigner, a prisoner, a patient on the analyst’s couch and a convert to Roman Catholicism."

Oliver Bernard, poet, Soho dweller and Jeffery's brother has died at the age 87. As ever it's the Telegraph with proper obituary tribute. What an extraordinary family the Bernard's were.

Do you take sugar Bill? 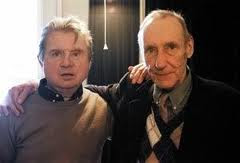 Francis Bacon serving tea to William Burroughs in the Reece Mews flat: over at the 'Arena Hotel' site.
Posted by William at 05:40 No comments:

I rang the manager of The Clash , a political punk rock group, because there had been a suggestion from the BBC Television Community Programme Unit that I have a four-minute discussion with the group. I have grave doubts about a Cabinet Minister appearing with a punk rock group, given what the media would make it, and he agreed with me that four minutes was not enough for a serious discussion. But what he said was interesting. The Clash are apparently very popular with working-class youngsters who don't find anything in our popular culture that meets their needs or reflects their feelings. He told me the group were not really concerned with being commercial and refused a lot of television because it put them into an artificial setting when they were really a live group. They were popular in Sweden, France and Yugoslavia. He said that to get any attention at all you had to be absolutely bizarre, but to understand what The Clash were trying to say you had to work really hard because the lyrics were in pidgin French."

I told you I was ill 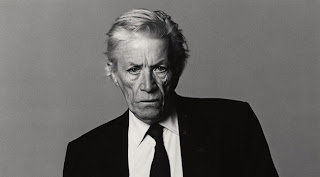 Jeffrey Bernard's Desert Island Disks from 1991 is up on the program's archive site: here. Rather sad and bitter sweat, and he sounds like he was at deaths' door. Some nice music choices however.
Posted by William at 06:10 No comments:

... Georgie Fame on keys. There's no time for the boring postcard competition at the end.
Posted by William at 04:03 No comments:

The Daily Telegraph Blogs section may well be as Private Eye said "that sheltered housing unit for the incurably insane" but the obituaries section is the best in the Fleet Street. Recently, they have featured two Soho characters of note:

Pamela Jennings, the well known beggar and one time jouster with Norman Balon, late of the Coach and Horses.

Jim Godbolt stalwart of the British jazz scene - booker for the Johnny Dankworth Seven and editor of Jazz at Ronnie Scott’s. He was also a contributor to the Telegraph obituaries page, and their depiction of him as a difficult sod was obviously based on first hand experience:

"Some members of the obituaries desk, however, were exasperated at being asked to sort out his prose and put up with his surly replies to queries. One of his more unusual submissions was two versions of the band leader Cab Calloway; one in standard English, the other in hepcat’s argot. Eventually an argument about the editing of his obituary of his brother, who kept a pub, led to the appointment of a more obliging wordsmith."

London Eccentrics is a compendium of bizarre, flamboyant or difficult Londoners. Living or dead, rogues and fantasists, drunk or sober, notorious and obscure all human life will be here.

This is not a guide book of heritage London. There will be no tourist kitsch, no cute survivals of Victoriana. Instead this blog documents those who really don’t care what others think of them, and those who broke with the conventions of their time. Some may have been great visionaries; others will have lived their lives in vain. We cast no judgement. New contributions welcome.